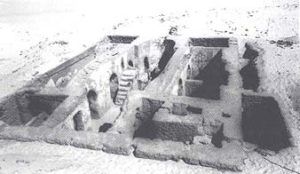 “The site of Abdalla Nirqi on the west bank of the Nile, about 3.5 Km to the East (locan north) of the temple of Abu Simbel, belonged to the area of the concession granted to the Netherlands by the Egyptian Antiquities Department in consultation with Unesco.

” The concession Abu Simbel North, contained two settlements, the ruins of which had been analyzed during a Survey undertaken by the Egypt Exploration Society”…

“The two settlements, both along the river’s edge, were called respectively “Town B” a Meroitic and later town site, and “Town A” a walled town of the Christian period..”

” The Central Church appeared to be surprisingly well preserved up to a height of about 3 meters, the level of the springing of the vaults covering the different parts of the church. The rooms were filled with almost clean sand which had protected the remaining paintings on the walls of the north aisle, the nave and in particular of the south aisle and inside the arched doors leading from the nave to both aisle, altogether providing the most complete series of Christian paintings in the whole of Egyptian Nubia.

” It appeared that the church, at the time of its abandonment, possibly as late as the 15th century, was already completely buried in the sand and could be entered only by means of a secondary staircase at the south-western end leading down from the roof-level and similar secondary entrance in the west-wall. When the bricks of the vaulted roofs were taken away and used for some other purpose as no traces of them were found, the church was probably very quickly filled with the clean and protecting sand…”

“…The paintings in the two church were clearly of two different styles, at the time of their discovery called ” Byzantine”, applied on a thin layer of whitewash and a “Nubian”, applied on a thicker layer of so-called Coptic plaster “…
“..The church was built in the middle of the 8th century, when it also received its first paintings of the “violet style”. The flourishing period was around 1000, when the paintings of the “white style” were applied, partly covering the paintings of the “violet style”. The church probably was used until the 15th century when it finally was abandoned and left to be filled up with the sand which already for a long time had covered it from the outside up to the level of the roof. 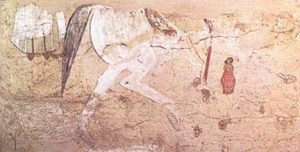 Fresco from the Central church of Abdalla Nirqi