Without question, Alex is an excellent, high end eReader. It’s also fascinating to see how Spring Design’s reader has developed after leaving Barnes & Noble, with its more minimalistic Nook. Shockingly, I did locate direct text manipulation in the lower display faster than the nook’s touch screen movement controls.

Maybe it’s just the way I look at it, but it seems like with the focus on the eInk display, something is taken away from the smaller scroll-and-hunt representation, and it is disturbing. Even more jarring, however, is the sometimes difficult touch screen, which makes choosing portions of text to annotate it a bit of a pain. (Choosing a single word is easy, though.) 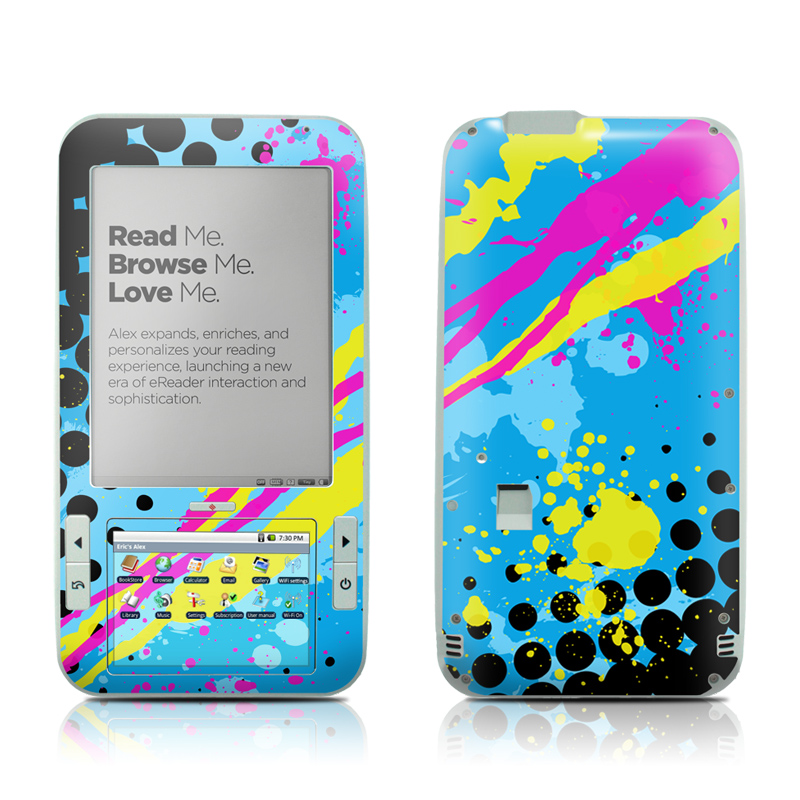 Ultimately, you won’t want to go with the Spring Design Alex eReader nor the Nook — choose Sony’s Reader Touch Edition  or Daily Edition , both of which have touch screens. You just need to touch the e-ink display to interact directly with the text. The glare, and bad contrast is one negative about the Sony touch devices. In order to maintain the clarity of e-ink, you need the less optimal user interface that is found in the Alex, the Nook, and the Kindle 2.

On the upside, the Spring Design Alex eReader has WiFi connectivity. The touch-screen pad provides a virtual keyboard for taking notes and for navigation. Its has 2GB memory capable of storing 1,500 electronic books. It comes with microSD slot for even more memory. The device displays image files. It also plays MP3 music files and some video on the navigation screen. The built-in speakers and mic are handy for voice notes.

Spring Design Alex eReader unit is quite expensive. It does not offer access to any major eBook store. The color LCD seems to diminish battery life rapidly. Navigation is rather difficult because there is no “home” button.

Essentially, Alex is unique among digital e-ink readers on the market today because it is a dual purpose eBook reader/mini-computer because of including Android on the bottom. The Alex is the hands-down best choice if you need Web, email and YouTube access — and social networking as well, either in the future or right now if you don’t mind a spot of hacking.

I personally feel that I’m too connected and over worked as a web reader; I wish to read for escape and relaxation. It’s just too tempting to be constantly bombarded with email and tweet notifications, not to mention the constant presence of the Web.

Sure, the lower display can be toggled so you can pretend nothing was there in the first place, but what’s the point of an Alex then? This isn’t saying not to buy Alex, but it just means that you have to be clear about the reading and computing experience you’re looking for.

The Spring Design Alex eReader looks good and is simple with limited buttons and round edges. It’s measurements are 8.9 X 4.7 X 0.4 inches, which makes the Alex bigger in length than the Nook and the Sony Daily Edition by 1.2 and 0.8 inches.

There are tapered edges on the back, giving the Spring Design Alex eReader a sleek appearance; on the top, there is a mini USB port to connect it to a PC and charge it, as well as a 2.5mm headphone port. We think a standard 3.5mm jack would have been better; unfortunately, it doesn’t come with an adapter.

We liked that the microSD port is easy to reach in a recessed space at the device’s rear. There are two unobtrusive, almost deceptively tiny speakers located at the edges on the bottom left and right.

Spring Design has partnerships for content with Borders and with Google Books. Alex will ship in mid-April. At that time, users will be able to access more than 1 million public domain books via Google; however, it will be necessary for them to wait until the end of May or start of June for complete access to the Borders store. The company is trying to secure partnerships with different providers for newspapers and periodicals.

Due to the fact that Spring Design Alex eReader comes equipped with the ability to support EPUB both with Adobe DRM and without, as well as HTML, PDF, and TXT eBook, it is possible for users to load eBooks from other stores provided the registered Adobe ID found on the device is a match with the one used to purchase books.

With a 6-inch e-ink EPD, this device’s display can compete with that of the Kindle or Nook, and you can choose from 8 shades of grey, a wide range of contrasts. Our eyes weren’t strained, either from indoor or outdoor reading, direct sun included. The text sizes offered are tiny, small, normal, large and huge. On the Small setting, there is a great amount of volume of lines and the size of the font.

The device completes page turns very fast (1.5 seconds), and the display is much better than the Nook and Kindle, whose pages flicker many times before settling down. Ultimately, this produces more engagement with whatever you’re reading.

Readers have multiple choices available when reading with the LCD display. A bar displays how far you have come along and allows you to change the pages quickly. These options are always listed underneath the bar: Go to Library, Bookmarks, Table of Contents, Collections, and Go to Location.

Dependent upon eBook or PDF permissions, other options will appear. You may see icons for adding or viewing notes. Highlights and links weren’t available when we opened a PDF of Chicks Dig Time Lords; however, they were available upon opening any EPUB book in the library.

When navigating through the menus and using apps, the Spring Design Alex eReader responded well due to the 600-MHz Marvell processor. However, we were shocked that the operating system’s keyboard was so slow when we typed on it. We had to be more deliberate when adding text, because taps would not register right away every single time we tried any application.

The review unit we were provided with had 802.11 b/g Wi-Fi connectivity; however, it did not have mobile broadband. Spring Design will release a 3G, EVDO/CDMA- and GSM-compatible models toward the end of the summer. We saw quick load times when using the internet over 50 feet from our router.

If the WiFi and LCD are on, the Spring Design Alex eReader lasts up to six hours, and can last up to fourteen days with WiFi off. The device retained over one-fourth of its battery charge over a two-day period with Wi-Fi enabled (but not always connected).

Spring Design Alex eReader is like smart phones and the Entourage Edge in that it doesn’t enter a true sleep mode when you turn off the LCD. When we used it, Alex seemed to manage its power more efficiently than the Edge. It was similar to a phone. After some time inactive, the LCD goes dim then shuts off; users can also turn this off manually while using the EPD to read. After longer periods of inactivity, the screen and buttons both become locked.