Description:  Great Zimbabwe has been inscribed on the UNESCO World Heritage List since 1986. The city stretches over 80 hectares in a valley and surrounding hills. The site is the largest group of ancient buildings in sub-Saharan Africa. It is composed of two sites dominated by the ruins of the hill where stands the acropolis , a true fortress with walls imbued with granite rocks. The ruins of the valley, home to the Grande Enceinte , represent a remarkable monumental ensemble, surrounded by a rampart 250 meters in circumference, consisting of 15,000 tons of carefully squared stone blocks. 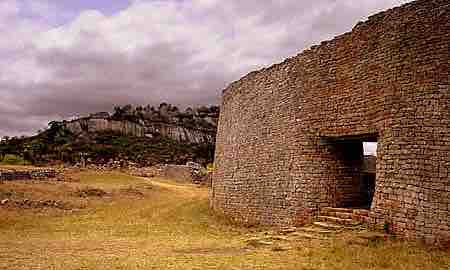 The technique used is dry stone masonry , without the use of mortar. The walls can reach 8 meters high and 4 meters thick at the base. Many of them are decorated with elaborate patterns.

The history of Great Zimbabwe can be divided into three periods: the occupation of the site began in the eleventh century, with the construction of huts made of earth and wood on the hill. In the 13th century, huts were replaced by larger earthen houses and the first stone walls appeared. The fourteenth century marked the peak of society thanks to trade with the east coast of Africa. But in the mid-fifteenth century the decline of Great Zimbabwe began, which slowly died out, probably due to the exhaustion of its local resources.