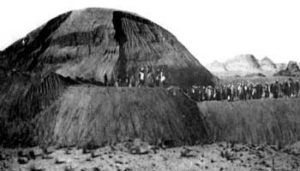 “Beyond the gorge of Abu Simbil and Gebel Adda, the desert cliffs and Pleistocene gravel terraces recede from the vicinity of the river and leave plains on both banks of modern alluvium and upper Paleolithic silt. The scanty vegetation is mainly composed of a few palms and “sunt” trees, which border the river’s edge.”

“We moved forward in extended order noting each possible site, and on November 3rd we came within view of a vast field of tumuli scattered over an area of more than two kilometres. As the tumuli partly obscured by banks of drift sand and decayed vegetation they did not at first appear to be anything other than natural formations, but as we drew nearer we noted that most of them were covered with large schist pebbles and were so regular in shape that their artificial nature was apparent.”

“On November 7th we received reports of plundering on the east bank of the river at Qustul, and visited the site consequence. We were amazed to discover a further series of tumuli directly opposite those on the west bank, at Ballana, which differed only in their smaller size and absence of pebble covering. Between some of the tumuli at the south end were a few small graves of the X-group period, and it was these graves which had attracted the attention of the plunderers.”

“Work was started on November 8th with 150 men and boys, and examination of depressions noted on the east side of most of the tumuli revealed the entrances to robbers’ passages which had been cut below the ground level on which the mounds were built. The clearing of these passages revealed the fact that they broke into burial chambers of large tombs, which had been constructed beneath the tumuli. Although varying considerably in the size and number of the rooms one feature remained the same in all of them: the entrance of the east side was always found blocked and intact. And it was obvious that the plunderers had realised that beyond this blocking was an open court, or pit, and that the opening of the door would cause an inrush of debris into the tomb”.

“The few object and pottery left by the plunderers served to show us that these tombs were built for persons of considerable wealth, and were to be dated to the X-group period. The possibility of offerings, etc., left in the open court before the entrance persuaded us to risk a considerable sum of money to get to that entrance by the removal of the tumulus… And on November 10th we commenced the excavation of the Tomb No.2.”
“Some days were spent in the removal of the tumulus and by the end of a week a large pit was revealed which contained a vaulted chamber of mud brick. This chamber, which was connected with the main rooms of the tomb, had been spared by the plunderers and in it were found, comparatively undisturbed, a large amount of pottery and some leather bags containing dates.”

“Clearing the debris to the east of this pit we uncovered a ramp which led down from the surface to the entrance of the tomb. By November 23rd the bones of sacrificed horses with their silver trappings and harness were uncovered, and it was then that we realised the true value of the discovery. The excavation of Tomb No.3, which was completed early in the following month, yielded even richer rewards”.

“At Ballana and Qustul the method of burial and the design of the royal tombs was the same, varying only in the degree of richness and size, according to the importance of the owner. In the construction of the tombs the procedure was as follows: An inclined passage was cut in the hard alluvium leading down to a large pit and a series of brick rooms were constructed in this pit with a small open court into which the inclined passage opened. In some cases each of the brick rooms have been built in separate pits and are connected by short passages tunnelled in the alluvium. The roofing of each room was barrel-vaulted, and in the larger tombs the doors had stone lintels”.

“Due, no doubt, to the moisture of the ground at the bottom of the pits at Ballana the walls were built with stone foundations.” It is evident that the owners of these tombs held to the Ancient Egyptian belief of the material survival after death of both animate and inanimate objects, for they buried with their dead wine and food, furniture, cooking utensils, jewels, weapons and tools and materials to make them, but in place of the ushabtis of the Egyptians they sacrificed their slaves and animals”.

“One room was usually reserved for the wine jars and drinking cups, and another was devoted to bronze and silver cooking utensils, lamps, jewels, weapons and tools. In the Tomb 80 at Ballana, for example, we found spears and axes together with metal working tools and iron ingots. In the larger tombs a separate chamber was reserved for the burial of the queen, who was undoubtedly sacrificed, with her attendant slaves. But in the smaller tombs the sacrificed queen was placed beside her consort.
The king was placed in the chamber nearest the main entrance to the tomb, and it is evident that his installation was the last act before the final closing. His body was laid on a canopied wooden bier, below which were placed bronze and silver vessels for his immediate use. He was dressed in his royal regalia and weapons for his protection were left leaning against the foot of the bier, and at its head lay the sacrificed bodies of a male slave and an ox. An iron folding chair was frequently placed by the side of the bier. The entrance to the tomb was then blocked with bricks and stone and the owner’s horses, camels, donkeys and dogs, together with their grooms and possibly soldiers, were then sacrificed in the courtyard and ramp. The animals were buried wearing their harnesses and saddles, the dogs in some cases had collars and leashes. The sacrificed humans met their deaths either by the cutting of the throat or by strangulation, and the animals were pole-axed. Finally the pit and the ramp were filled and a great earthen mound was raised over the tomb; in many cases offerings such as weapons, jewellery, vases, game etc., were buried in the mound. And at Ballana most of the mounds were covered with a layer of large schist pebbles”…. 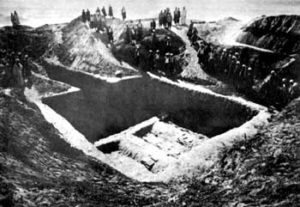