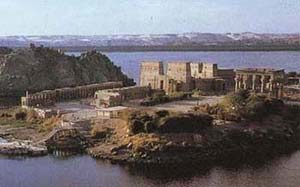 The temples of Philae are the creation of several dynasties. The island was dedicated to the cult of Isis.

The oldest structure on the island is the kiosk built by Nectanebo I (380-362 BC). To the north of the kiosk he also built a temple gate which was eventually integrated into the first pylon of the Temple of Aset (Isis). From this time until the Roman occupation in the 1st and 2nd centuries AD, many different temples were added to the island.

Worship was continued on the island of Philae into the 6th century AD, and both the last hieroglyphic inscriptions, written in 394 AD, and the last demotic inscriptions, from 452 AD, are also found there. One reason that Philae was able to continue the Ancient Egyptian religion well into the Christian Era of Egyptian history was due to its location in Lower Nubia, far into Upper Egypt near the southern border, where it became a haven for the faithful.

Philae served to disseminate Egyptian religion to Lower Nubia and Upper Nubia (Sudan) in the south during hundreds of years. Many of the reliefs and inscriptions of Meroe in Upper Nubia in the Sudan show influence from the texts of the Temple of Aset at Philae.

In May 1968, Unesco endorsed the decison taken by the United Arab Republic to dismantle and re-erect the monuments on the neighbouring Island of Agilkia which is sufficiently elevated to be above the maximum level of the water. Work started in 1974 and finished at the end of 1979. The new site was inaugurated on March 10, 1980. 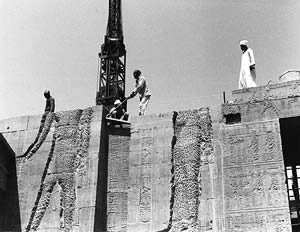 Work in progress for the reconstruction of the Philae temples