J Amais topic has spilled much ink as traditional African sculpture 1 . It has been one of the masterpieces to measure the “civilization” of the black man and his ability to create, capacity variously appreciated throughout history until at the beginning of this century, cubism helping, unanimity begins to be made on the exceptional character of African sculptures that have always been confused with African art of which they are only a part, the most important probably, if one had to judge only by the number of created pieces that have reached us. 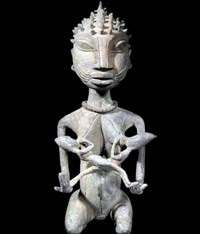 The places of traditional African sculpture

What does “traditional Africa” ​​mean? If we consider only sculpture, it must be admitted that such an Africa is inhabited by blacks whose basic religious traditions are “animist”. Such an Africa excludes North Africa or “Maghreb”. But again, caution is needed: the arts challenge the borders. How does one understand the integration of Sudan into the Maghreb when one knows that this country includes two inhabited regions one by white-skinned men, Muslims, and the other by black-skinned men whose religious traditions could to be close to those of most blacks? Is Islam sufficient here as a criterion for classification? He does notand colonization, which in principle lasted less than half a century, are relevant criteria of division: populations sharing the same cultures overlap with them. Faced with these questions, we decided to write for the man of today: he refers much more to the states than to large areas whose boundaries for him would be unclear. As with any African artistic creation, we preferred to classify African sculpture into four main groupings ” sculpture in West Africa , Central Africa , Southern Africa and East AfricaThey have the advantage of smoothing the weight of geographical factors over art, and they question the geographical determinism underlying the classification of forests, savannas and the Sahel in Africa, after all. Mali or Burkina Faso in the savannah or Sahel zones have not prevented them from producing masks as complex as those of the forest areas, or in principle the raw material, wood, is more abundant. in these cases, it owes much more to the will and freedom of man than to an external conditioning, however restrictive it may be.
It has also been observed that sculpture is practiced on a large scale only in sedentary societies, living on the fruits of the earth. Africa does not escape this rule: the nomads, mainly Muslims, forced to permanently transport all of their furniture and their gods do not carve … There is a tendency to believe that sculpture requires a certain stability of the conditions of life in society and the existence of cults compatible with the representation of the gods.